Professor’s portrait: The researcher who wants to teach machines to see

When will we be able to teach robots to see like humans do? That means, to really interpret the surroundings and then make rational decisions. Today, research has not got that far. But Joseph Bigun, Professor of Signal Analysis, wants to be involved in the development of the first visually intelligent machine.

”Currently, there are no robots with a visual intelligence so well developed that they can draw conclusions like we humans do.”

Perhaps vision is a human’s most important sense. We can manage without it, but it’s with our eyes most of us see and interpret the world.

"Our vision uses a great deal of our brain's capacity. We need to process all the visual data and then put them into context. It really applies to anything we want to do. Our vision is so essential to our lives that we hardly think about what we would do without it.” 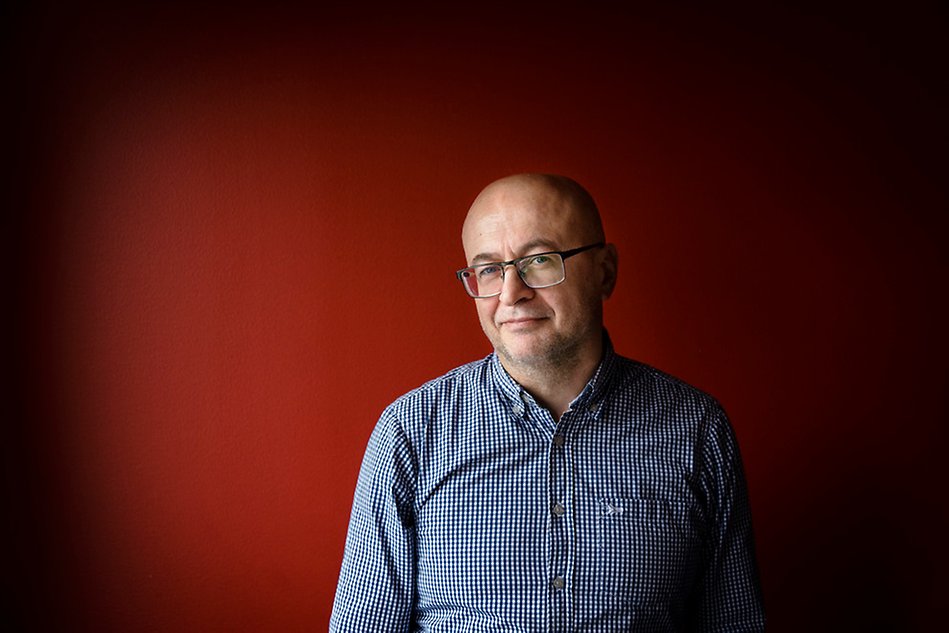 Josef Bigun is a Professor of Signal Analysis and Intelligent Systems. His research is about biometrics, that is technical means for computers to identify and collect information about us and our characteristics.

Josef Bigun is a Professor of Signal Analysis and Intelligent Systems. His research is about biometrics, that is technical means for computers to identify and collect information about us and our characteristics. It could be eye scanning, DNA, fingerprints or recognising a walking style. This involves teaching computers visual intelligence, and eventually teaching a robot to recognise images or patterns.

”We already have computers with different types of intelligence, but it’s not sophisticated. Currently, there are no robots with a visual intelligence so well developed that they can draw conclusions like we humans do.”

Human vision is still largely superior to that of robots, but to succeed in making a robot copy the way we see the world is what fascinates and motivates Josef Bigun.

”It's a big challenge to teach a robot to do what we've learnt since we were children”, he says.

It was a bit of coincidence that Joseph Bigun ended up at Halmstad University. After graduating with a MSc in Engineering at Linköping University, he continued with a PhD in Computer Science at the same university. After ten years as a researcher at the Swiss Federal Institute of Technology, he returned to Sweden and received a position at Halmstad University, which has become one of the premier institutions in Sweden for research in visual intelligence and in particular, biometric identification.

The collaboration within the CAISR (Center for Applied Intelligent Systems Research) research group is important. The researchers discuss results and share ideas, and collaborate with many international colleagues. In 2016, CAISR organised the International Conference on Biometrics, with over 200 participants from around the world. It is one of the oldest and most respected conference regarding current research in biometric identification.

The research field in artificial intelligence is very active. It has also attracted much attention in media in recent years. While challenging, it’s primarily a lot of fun, Josef Bigun thinks.

“There’s a constant stream of new results published and things happening all the time. It has been like that for the past 40 years.”

Josef Bigun’s goal as a researcher is clear. He would like to leave a better world, he says, and as a researcher he wants to contribute to continually improving both the environment and our lives.

”I don’t try to solve all the problems myself, but in my niche, I try to see how we can contribute. For example, by cameras that help to recycle and make environmental benefits, or to improve future transport with autonomous vehicles. I believe in the role of knowledge; new knowledge will help solve several problems.”

He also hopes that his research will be useful for the robots of the future.

”Robots will need to help with different things in the future, where we won’t have enough human resources. Our society is still becoming more and more automated; what's left to automate is often linked to visual intelligence.”

For example, robots can help in healthcare, but the technology can also be used with other types of services.

”As an example, cameras and sensors could become intelligent and beep if you haven’t turned off the stove. Or they could be used to check if a passenger has shown his ticket on a bus.”

A research field that sparks controversy

But it is not always easy to work with issues related to visual intelligence and intelligent computers. Sometimes the research is met with criticism and skepticism – or fear. Josef Bigun, on the other hand, argues that a future with visually intelligent robots is a bright future.

“Everything can be used for good or bad purposes. But I think intelligent systems really will be able to help us in the future. I think it's legitimate to be skeptical, that is why we should have better technology, make laws about using personal data and have good education about computers and artificial intelligence. It's much like cars: traffic rules, better vehicles and infrastructure and driving license training make traffic safer. We don’t ban the cars, the same goes for technology – by looking at the benefits and acting on several fronts we can minimise the risks.”

The best thing about working as a researcher is producing new knowledge, Josef Bigun thinks; and it’s something he can always do working in the research group CAISR.

"We are constantly developing new knowledge. It’s difficult to point to something that was particularly important in 2017. However, 2017 was better than all previous years because we are constantly building on our knowledge – it's like an artist who keeps working on a piece of art”, he says.

The text was originally written for CAISR annual report 2017.