Magnus Bergquist was inaugurated as a new Professor at the University’s Academic Ceremony in November. Throughout his working career, he has been interested in collaboration and networking. The recurrent theme in his work is the role of culture and norms, values, experiences and work.

He started as an Ethnology student – today he is a Professor of Informatics.

”I've always been interested in crossing boundaries, and therefore have always worked where there are people from different environments who like to work in and with new areas. That's why I decided to come here.” 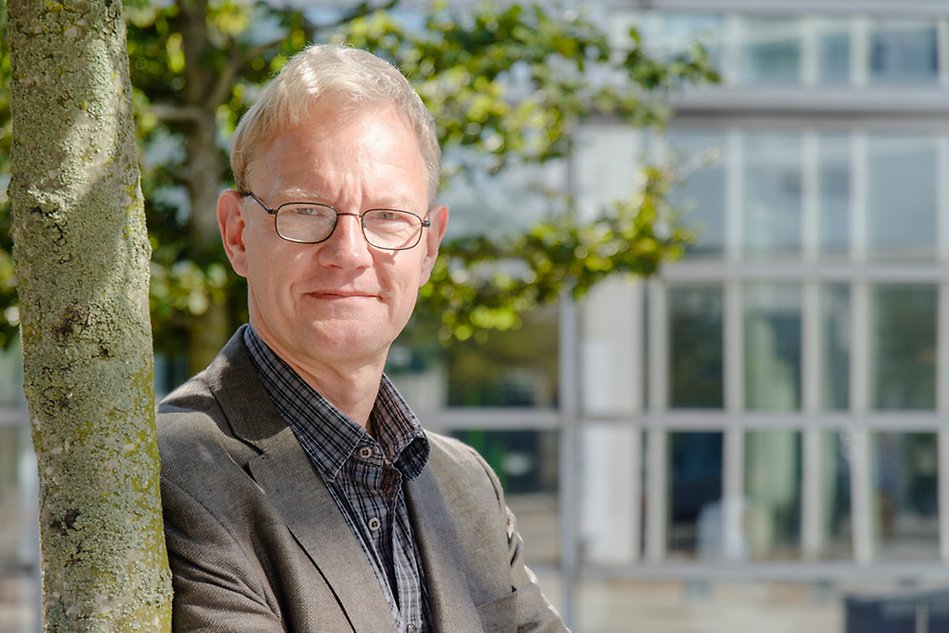 Ethnography is his tool – a method that aims to understand the studied group from within, something that is useful in many environments. Magnus Bergquist is also driven by the desire to understand. Why do other people do things differently?

”You can choose to sit in the office and think about how everything is connected, or to go out and see how it works in reality. I have benefited from my ethnographic background, through observations, qualitative interviews, and field studies. Within IT-development, we need to involve users in the development of a system and understand the actual practical work.”

In the 1980s, he started working at the architecture section at Chalmers University with, among other things, improving the environment in neighbourhoods where flats stood empty; in fact, his thesis was about urban development.

”At the same time, I became interested in digitisation and I wrote a project proposal which I called ’Cultural Perspectives on the Information Society’. It was here I began my research on what came to be my main field i.e. the consequences of digitalisation.”

As an ethnologist, Magnus Bergquist was at the time (in the mid-1990s) quite alone in taking an interest in IT. He began to build a network of researchers to collaborate with. He came in contact with informatics at the University of Gothenburg. In “The Internet Project", researchers from different fields such as philosophy, sociology, informatics, linguistics among others studied the Internet from different perspectives. Magnus began very involved himself to the consequences of digitisation in society, not least the changing communication patterns.

”It was then the research I had conducted started to develop; how people collaborate digitally and innovate together. I studied the open-source model with net based ethnography to understand how people who never met physically were able to develop a whole operating system faster and better than a company where people sat together.”

The open-source model has created many of the technologies and digital platforms which became the foundation of the Internet as a tool for communication and collaboration.

”Many programmes and tools that we use today were invented during that era to share knowledge and information with each other. The concept of open innovation is usually used to describe this type of collaboration and co-creation. Innovations are created in the network and through collaboration. Today we talk about the importance of collaboration between, for example, businesses and other partners to create value.”

Magnus Bergquist is currently working with, amongst other things, a project concerning value networks' role in open innovation. Experiences he gained in earlier life regarding observations in the field, he can now use on the Internet. His method book "To catch the net" was one of the first that took ethnography to new contexts.

”In the early 2000's, there were no books in Swedish about what it meant to translate ethnographic methods for the Internet, so we wrote a book for both researchers and students.”

Support in work and leisure

He has also studied how social media enables authorities such as the Swedish Social Insurance Agency to communicate in a new way with fellow citizens. At Halmstad University, his research has found a new direction that created an extra reason to be there: health innovation. At present, he is focusing on all the systems that are within the health care system, such as patient medical records.

“Health systems are like islands; they do not communicate with each other. We must develop health care systems together with people who work in health care so that we really contribute with something of value.”

Digital platforms are needed to facilitate collaboration both in hospitals and in relation to the patients.

”We need to create systems that support people in areas that are important in both their work and leisure. We are now working with the hospitals in the county of Halland making sure information will be available across borders. The next step is to see how to use this knowledge to create good practical use. And then once again I have a reason to go out and ask: How do you do this here?”

Magnus Bergquist was born in 1960 in Kristianstad, Sweden. Thanks to his curiosity of fellow man, he studied ethnology and completed his PhD in 1996.

Magnus Bergquist came to Halmstad University as a visiting researcher in 2013, where in 2015 he became Professor of Informatics and the same year Programme Director for Halmstad University’s Knowledge Foundation – Research for Innovation.