Vehicle activated signs, artificial intelligence’s inability to forget, and tools to evaluate Parkinson’s disease – these are just a few of the topics that Professor Mark Dougherty has spent his time on the past few years.

“If you are going to find ways to support people in their daily life, you really have to be interested in them.”

Now he has joined Halmstad University as a Professor in Information Technology. He will divide his time between teaching digital forensics, and doing research in CAISR on intelligent environments and elderly housing. 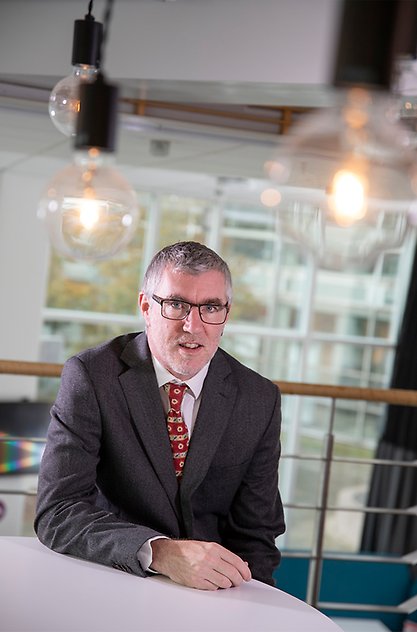 Mark Dougherty grew up close to Cambridge in the UK and started studying engineering. Later he took some courses in computer science and economy. It is hardly surprising that his research has spanned a large number of areas and faculties, and that he is interested in the methodology of multidisciplinary work.

”I’m sure it will not be long before I work with people in healthcare and in economics too. That’s what I like, to go into a lot of different fields. I’m a very eclectic person, which is also reflected in my background in education”, says Mark Dougherty.

He grew up close to Cambridge and started in academia in the equivalent of a Swedish ’civilingenjör’ education. He fluctuated between this and the much more theoretical subject of computer science, throwing in a number of economy seminars in the mix. It is hardly surprising that his research has spanned a large number of areas and faculties, and that he is also interested in the methodology of multidisciplinary work.

In CAISR, Mark Dougherty will work in the intelligent home lab, designed to explore new technology to support elderly and people that need home care. One of his areas of exploration will be ’change detection’. What this means is that data from different types of sensors will be analysed by artificial intelligence, targeting signs of change in a person’s daily routine such as getting out of bed at unusual times or simple changes in movement patterns.

”You want to spot things that are different, but because they haven’t happened before, it is difficult to programme a system to find them. This is a classical AI problem.”

Mark Dougherty would like to try using audio sensors, and develop AI systems to analyse sounds. He has in a previous study analysed speech in people with Parkinson’s disease to note disease progression. In another study, sounds were collected from cars on gravel roads and were analysed to determine if the roads needed maintenance.

”Humans are really good at sound, but AI is not – yet. Computer vision has actually gotten much further than AI has on sound. I would like to push this development along.”

Mark Dougherty points out that microphones are already present in many old or disabled people’s homes, for example in emergency telephones. If the microphones were constantly activated, this would provide an AI with plenty of information making data collection simple in practice – but ethically challenging. Mark Dougherty emphasises that the project must be designed carefully and respectfully, and of course the trial participants must be well informed and interested in the project. It is also crucial that the researcher is a person genuinely curious about people.

”If you are going to find ways to support people in their daily life, like helping them to choose or manage a medical treatment, you really have to be interested in them. If you’re not, you won’t create anything useful. It’s the same if you want to make transport safer. You can’t do anything without asking ’what do people do?’.”

He claims there are numerous support systems that people simply don’t comply with. Just like they don’t necessarily comply with doctors’ prescriptions, or tell the doctor the whole truth.

”Old people say ’everything is ok’, because they don’t want to be a burden. That’s why it can sometimes be a real breakthrough to measure people, like we do. This makes it possible to say ’we can see it is not ok, and we can help you’.”

Swedish universities have a great freedom

Teaching interests Mark Dougherty a lot. This is actually what first brought him to Sweden. He came from the University of Leeds, with three times as many researchers as teaching staff, to take a lecturing position at Högskolan Dalarna.

– I wanted to do much more teaching than I did. In Swedish universities we also have great freedom to set our own agenda and methods compared to many other countries, where you are more micromanaged.

He tries to have an ongoing discussion with the students, and evaluate courses in the middle rather than the end. Should we do more of this? Skip that? Change direction?

– If they are not interested in the stuff I’m telling them, it won’t work. And to get a true collaboration we have to get the students involved early in the process, not at some late formal meeting when the course plans are set already.

Recently Mark Dougherty has developed a rather exciting extracurricular interest: speed skiing, where the skier tries to reach maximum speed on a specially prepared hill (world records are well over 200 km/h). Although Mark Dougherty started practicing as an adult, he has become skilled enough to be in several competitions.

”Most people that start late never get to a very high level, but I put a lot of work into this. My two children competed in alpine skiing and my daughter is training for a position in the Swedish national speed ski team. I thought it would be fun to do the same, and race together.”

When Mark Dougherty lectures, he occasionally shows a film of himself speed skiing.

”I want to show my students that if you really want to do something, it doesn’t matter what age you are or if you have some disadvantages. You can do it! Many students today have a problem with commitment; they want to play safe instead of pushing themselves into something different. But at some moment you just have to find the courage to go over the edge. It doesn’t matter if you’re skiing or giving a presentation: Once you are over, there’s no room for fear. You just enjoy the ride.”

Mark Dougherty was born in 1967 in Cambridge, England. He studied Engineering and Computer Science at Cambridge University before moving to the Institute for Transport Studies, University of Leeds. Here he defended his thesis: Neural Networks Applied to Transport. He moved to Sweden in 1996 and was appointed as docent at KTH (1999) and professor in Computer Engineering at Dalarna University (2001). His main focus in research is machine learning applied to transport systems, infrastructure maintenance and medical diagnosis. He is an enthusiastic teacher and developed one of the first educational programmes in Digital Forensics in Sweden. During 2018 he was Guest Professor in CAISR, and in 2019 he was appointed full professor in Information Technology at Halmstad University.