Professor’s portrait: Without water, there is no life

Antonia Liess, recently appointed Professor of Environmental Sciences, focuses her research on maintaining healthy aquatic systems. Her research has always revolved around aquatic systems, except for one excursion into the terrestrial roam of boreal forests.

"Without water, there is no life, and all water is teeming with life. Put a drop of pond water under the microscope and you can sit there for hours watching innumerable microorganisms swimming or crawling around as well as contracting and extending their cilia."

“Healthy and balanced marine and freshwater food webs are paramount to securing drinking water quality and food production”, she says, and continues:

“We examine under which conditions wetlands in agricultural catchments most efficiently improve water quality by removing nitrogen. In the agricultural landscape, the leakage of nitrogen into adjacent water bodies can lead to eutrophication-related problems. Here, building wetlands to intercept and remove nutrients can significantly improve water quality in agricultural streams, lakes, and coastal waters. Where to place these wetlands and how to best construct them under different hydrological conditions for maximum nitrogen removal is one of the questions we will answer with our research.”

Part of the temperate zone in the northern hemisphere is called boreal. The region is characterized by coniferous forest and tundra. The average temperature in July exceeds 10°C and the growing season is shorter than 100 days. The boreal zone covers approximately 15 percent of the Earth's land mass and extends from Russia and northern Europe to Canada and Alaska.

Two other current research projects focus on the causes and consequences of browning of boreal waterbodies.

“The increase in water colour – browning – of lakes and rivers is especially pronounced in southern Sweden, thus leading to problems for drinking water production and tourism, but also to ecological consequences for lake food webs from microbes to fish. For example, certain fish species that are favoured for human consumption and recreational fishing are disadvantaged by browner waters, whereas other, less economically attractive fish species increase with browning. This is partly caused by shifts in taxonomic composition of lower food web levels”, says Antonia Liess.

Taxonomy is the science of dividing or classifying organisms into taxa such as kingdoms, families, genera, species and subspecies. In taxonomy, one works with describing different species, what it is that distinguishes and makes the described species special and unique. 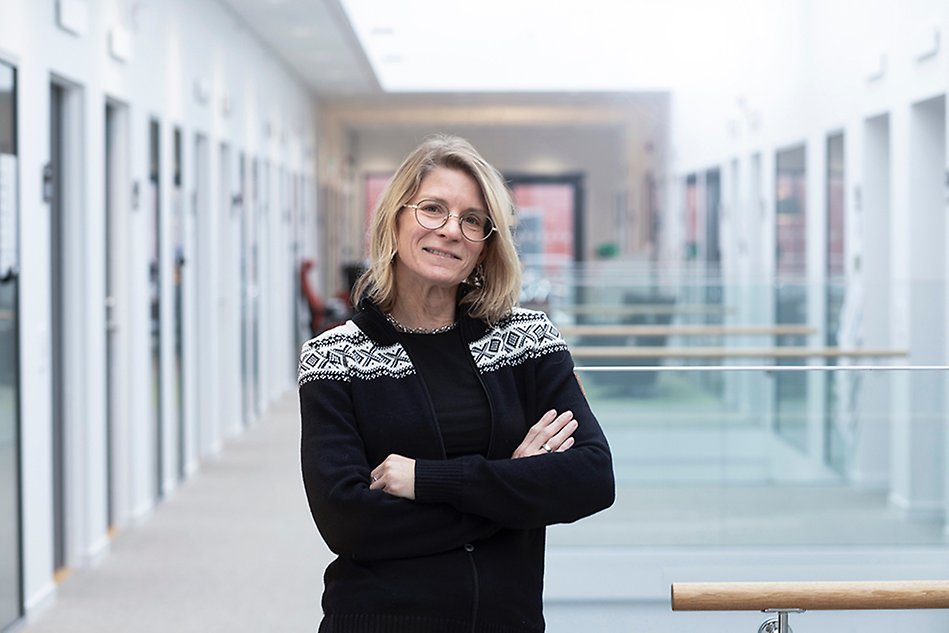 Antonia Liess started a permanent position as a Senior Lecturer of Environmental Science at Halmstad University i 2016. She became a Professor in 2022.

Together with collaborators, Antonia Liess conducts research in and around Lake Bolmen, which is of special importance as a drinking water reservoir for half a million people. Here, they investigate plankton community shifts due to lake browning, using experimental mesocosms.

“In addition to examining the consequences of browning, we work on mitigating increased browning by determining its causes. In a unique multidisciplinary collaboration with other researchers and with stakeholders around Lake Bolmen, we aim to tackle and alleviate the cause of Lake Bolmen’s increasing water colour. The rewetting of certain parts of the Lake Bolmen catchments may be part of solution”, says Antonia Liess.

A mesocosm is a container that is so large that it includes many parts of the food web. It is possible to have many mesocosms next to each other to recreate the experiments you are doing. It increases the strength of the test and thus the certainty of the results. The conditions in the container, such as nutrition, water color, and the composition of the food web, can be controlled because it is possible to add substances or organisms in a controlled manner. Mesocosm studies are an important complement to laboratory experiments and field studies, and really live up to their name – mesocosm means "medium-sized world".

Water is essential to life

It is the mixture of urgency, complexity and beauty of the research field that fascinates Antonia Liess.

“Without water, there is no life, and all water is teeming with life. Put a drop of pond water under the microscope and you can sit there for hours watching innumerable microorganisms swimming or crawling around as well as contracting and extending their cilia. All these organisms are intimately connected to each other and work together to provide us with clean water, food, spiritual enjoyment, and other ecosystem services. Every aquatic ecosystem is also connected to the land around it and is thus part of the landscape, its catchment. These catchments need to be used sustainably. Agriculture, forestry, mining, and industrial activities all affect the quality of the water in their catchment”, she says and continues:

“Providing and protecting clean water for drinking and for maintaining ecosystem services is the most urgent challenge humanity faces. Every human activity – from inventing new chemicals and producing more cars to cutting down forests and draining wetlands – affects the aquatic environment, thus posing a most complex problem to solve. Lastly, working with aquatic ecosystems, one experiences the beauty of nature – from watching single celled organisms under the microscope or a salamander swimming through wetland vegetation, to taking samples on a misty lake early in the morning.” 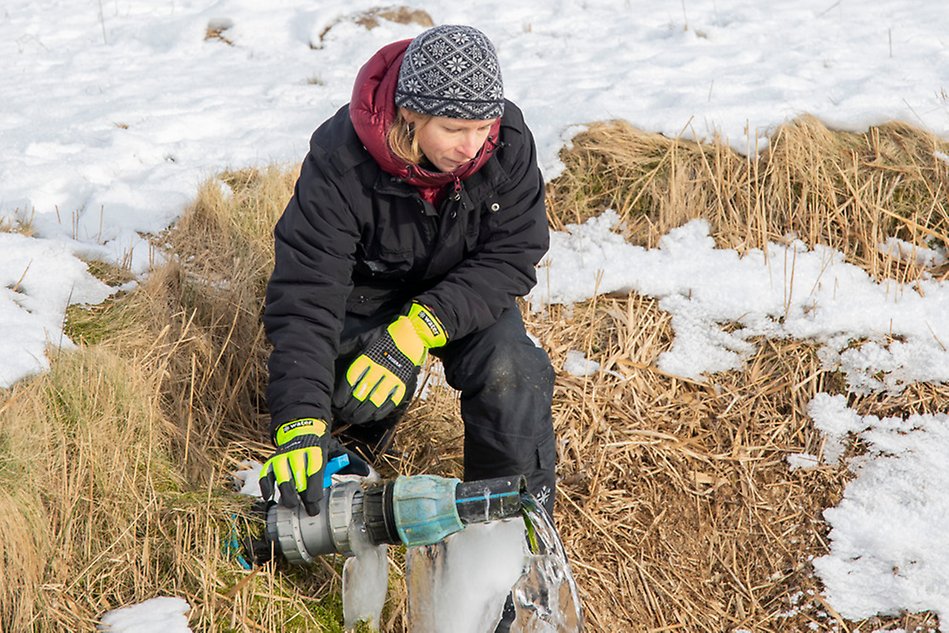 Antonia Liess heads the Wetland Research Centre with its unique experimental wetland area, EWA for short. EWA contains eighteen separate replicate-constructed wetlands and is used for experiments by Antonia Liess’ own group and by external researchers.

Research and teaching a winning combination

As Antonia Liess becomes a professor, she looks forward to being able to convey her research to an even larger crowd, but she doesn’t think that her day-to-day life will change all that much.

“A researcher has three main work areas. The first is research, the second is teaching and the third is interacting with stakeholders and the public. I love my research, but I am also passionate about teaching. Teaching and research work much better in combination than in isolation. Interacting with students improves the quality of the research I do, and my research improves the quality of the teaching I do”, she says.

She doesn’t think that her students will care too much about her new title:

“For teaching it’s much less important whether one is a professor, senior lecturer, or lecturer. Much more important than one’s title is the subject knowledge one has. Students recognise and appreciate a teacher who is competent and interested in the subject he or she teaches – with or without a title”, she says.

"The only times we see a small and temporary reduction in CO2 emissions are during periods of economic crises. Maybe we need to understand that a growing consumption and a growing economy – however green we may wash either – do not reduce CO2 emissions?"

In the interaction with students, for instance when teaching courses at the new study programme “Environment, Innovation and Sustainability”, many thoughts are raised. Something that Antonia Liess thinks about quite a lot is the way we use the word “sustainability” without making any actual change.

“We have used the word ‘sustainable’ a lot in the last ten years. Everybody constantly emphasises how sustainable their company, products, and production lines are. We have biogas, electric cars, solar and wind power, green industries, circular economies, carbon capture and storage, the Kyoto Protocol, and the Paris Agreement. But looking at CO2 concentrations in the atmosphere, there is no indication that we have even started to reduce the increase in CO2 emissions. On the contrary, the CO2 release is till augmenting at an ever-increasing rate. The only times we see a small and temporary reduction in CO2 emissions are during periods of economic crises. Maybe we need to understand that a growing consumption and a growing economy – however green we may wash either – do not reduce CO2 emissions?” she concludes.

Antonia Liess was born in Munich, Germany, in 1975 and studied biology from 1995 to 2001 at the Ludwig Maximilian University in Munich and as an Erasmus student in Sweden at the University of Gothenburg. Directly afterwards, she commenced her PhD studies in biology/limnology at Uppsala University, where she mainly worked at the Erken Laboratory, Uppsala University’s limnological field station. The focus of her research was the trophic interactions in benthic lake food webs, and in 2006 she defended her thesis with the title “Nutrient Stoichiometry in Benthic Food Webs – Interactions Between Algae, Herbivores and Fish”. After continuing with some smaller projects at Uppsala University, she moved to Dunedin, New Zealand, for a Formas-funded postdoctoral visit to the University of Otago. In New Zealand, she worked with streams and how land use and nutrient runoff from agriculture affect stream biodiversity and productivity.

In 2009, she moved back to Sweden, but to Umeå this time. At Umeå University she built up a research group using ecological stoichiometry theory for understanding life history adaptations to high latitudes. She also expended her group’s research into new habitats, such as the brackish and marine environments, and started working with pelagic food webs, as well as with forest ecosystems. In 2010 she was awarded the royal scholarship from the King Carl XVI Gustaf 50th Anniversary Fund for Science, Technology and the Environment and in 2011 the Young Researcher Award from Umeå University. In 2014 she received her docentship in ecology, and in 2016 she started a permanent position as a Senior Lecturer of Environmental Science at Halmstad University, where she now heads the Wetland Research Centre with its unique experimental wetland area, EWA for short. EWA contains eighteen separate replicate-constructed wetlands and is used for experiments by Antonia Liess’ own group and by external researchers. Her current research group at Halmstad University consists of one PhD student (funded by the Swedish Environmental Protection Agency), a project assistant (funded through a local nature conservation initiative project), a research engineer, a senior professor and a variable number of project, bachelor, and master students as well as Antonia Liess herself, since 2022 a Professor of Environmental Sciences at Halmstad University.

Research at the School of Business, Innovation and Sustainability